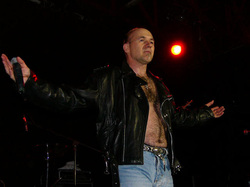 Tony Martin March 1st 2012
Iommi's company has said that your albums in the band are gonna get re-issued. Do you know of anything specific that could be used as the bonus disc? Or that you would like to see?
There are only a few things that could be used from the TM days but nothing more was said about the releases .. I cant imagine it happening..........


We know of the Sabbath shows in Moscow were filmed, Were there anymore shows filmed from 1987-1990?
No other shows were filmed in that period that i am aware of...


In his book Iommi mentions he is sorry for treating you like he did moving you in and out of the band. Whats your reaction?
No reaction NOW to it but at the time it was a horrible period.


Any news on your Book Of Shadows solo album?
Book of shadows is an ongoing work..... it may be a long time before that gets finished.


Rock autobiography books are coming one after another. You ever consider doing one yourself?
Books are ok if you believe in them ... I have no plans to write a book but i do have thoughts about maybe a video of my career.... I would prefer that.