Tony Martin Quiz!! Can you pass the test to prove your a fan of his? 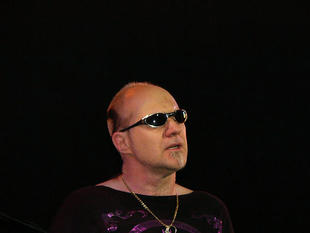 For fun here are some quiz questions of the Tony Martin era. And do your best to get these out of memory!

What instrument was he gave at 7 years old?

True or False - Tony fell out of a tree and broke a leg as a kid?

True or false - Tony played guitar in 'The Alliance'?


Only three band members did the TV show Furia Metal for the 1994 South America gigs. Which three was it?


Which song from a Tony Martin solo album was also played around with during the Dehumanizer sessions?


What ballad song did Tony Martin do with Sabbath that was done just a few times in the 70's?


True or false - Tony has shared the stage with Rob Halford?


Out of these songs which one was about Beverly Allitt?
When Death Calls - Evil Eye - Hand That Rocks The Cradle - Cross Of Thorns - Guilty As Hell


Did Geezer Butler write any lyrics for Cross Purposes?


For what specific reason was Tony Martin told to to introduce Geezer Butler during the bass solo of Time Machine?


Did Tony Martin ever sing 'Sign Of The Southern Cross' live?


What was the only song on TYR to not be performed live at anytime?


Can you name all the Black Sabbath band members in the band with Tony Martin, that he later on worked with?


Which one of these songs has Tony Martin performed with his solo band?
The Sabbath Stones
Heaven In Black
War Pigs
I Wont Cry For You
None Of The Above.


How many days did it take Martin to fully recorded the Eternal Idol album?


What family member was in Tony's solo band for the Scream tour?


Who was rumored to been asked to come back to the band while Tony Martin was already hired and been working on Cross Purposes?


What song performed live during the Forbidden tour did Tony Iommi play the intro and outro similar to Die Young?


What album did Tony sing on between Eternal Idol and Headless Cross?


Did Geezer Butler join Sabbath in 1991 with Tony Martin still in the band?


Tony wrote a song about a dream he had, which one was it?


How many of the B-side and Japan only Sabbath tracks can you name?


What Sabbath songs did Martin re-record for other albums later on?


How many shows did Black Sabbath do in the USA during the Eternal Idol tour?

Answers :
Anthony Harford.
Guitar.
True.
False, he was the singer.
Iommi - Martin -  Bill Ward.
Raising Hell.
Changes.
False.
Hand That Rocks The Cradle.
No he didn't.
He was told to do it or Geezer would leave.
False, co-wrote only.
Yes, just the begining.
Heaven In Black. Every other song has been played during either a Sabbath or Martin solo show.
Geoff Nicholls (Tony Martin Band), Neil Murray (M3, 1992 Tour, Empire) Cozy Powell (1992 Tour, Forcefield II), Bobby Rondinelli (Our Cross Our Sins album), Laurence Cottle (Back Where I Belong), Brian May played a solo on When Death Calls (Back Where I Belong).
War Pigs, played during the Scream tour.
7 or 8 Depending on what source you ready. Iommi said in an interview he had 7 days to do it but he went over a day.
Joe Harford, Martin's son.
Ray Gillen.
Rusty Angels.
Forcefield II.
Yes.
When Death
Calls.
Crossbones.
Cloak And Dagger, Loser Gets It All, What's The Use, Black Moon, Some Kind Of Woman, Paranoid/Heaven & Hell Live, Interview with Dante of Raw Magazine.
Jerusalem and Anno Mundi.
None.